November 17, 2020– Fourteen Pacific Island Countries (PICs) are in various stages of implementing the Kigali Amendment to the Montreal Protocol, which require Parties to gradually phase down the production and use of hydrofluorocarbons (HFCs). HFCs are greenhouse gases commonly used in air conditioning and refrigeration. The Kigali Amendment came into effect in 2019 and countries are required have an HFC licensing system in place by January 2021. 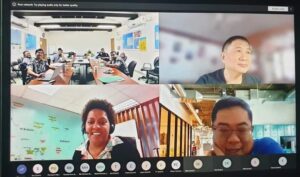 “OCO recognizes the critical role that customs administrations play in the control and regulation of all substances that have the potential for ozone depletion and global warming,” OCO Trade and Revenue Management Adviser, Laisiana Tugaga said. “OCO has an ongoing partnership and collaboration with United Nations Environment Programme (UNEP), which is important to support member countries to effectively implement their obligations under the Amendment.

Recently, in a virtual meeting coordinated by UNEP, Pacific Island countries gave updates on the progress of their national legislations for HFC licensing system as well as share knowledge and ideas on actions countries could take to achieve the requirements of the Kigali Amendment.

The effective enforcement of the HFC licensing system at the borders will be the responsibilities of customs administrations but to do so, they need to have a Harmonized System (HS) code for HFCs and HFC blends. This is where the challenge is in the Pacific, as in the current version HS 2017 all HFCs are contained in a single HS code, which does not allow differentiation of the individual chemicals or of mixtures.

The World Customs Organisation (WCO) had recommended an interim approach through the creation of HS codes for HFCs in countries’ individual national nomenclatures until the entry into force of the 2022 edition of the HS. However, to so the PICs will need to conduct a few administrative processes such as obtaining cabinet or parliamentary approval, which could be quite a lengthy process.

“We understand the challenges we all face in the Pacific. At OCO, while advising members on the interim actions they could take to implement the requirements of the Kigali Amendment, we also proactively assisting them to undertake the preparatory work for the implementation of HS 2022. HS 2022, which comes into effect in 1 January, 2022 includes the creation of new subheadings for HFCs.”

END_OF_DOCUMENT_TOKEN_TO_BE_REPLACED

Suva, Fiji, November 1- Jim Sutton is the head of Solomon Islands Customs and is one of the most experienced Customs officers in the region with 45 years of Customs work experience in Australia, Afghanistan, Pakistan, Liberia, Ghana, Angola, India, Vietnam, East...