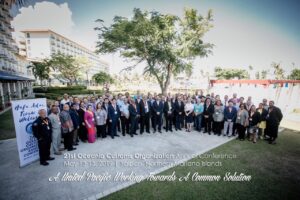 The 21st Oceania Customs Organisation (OCO) annual conference commenced on 13th May, 2019 in Saipan, Commonwealth of the Northern Marianas (CNMI), hosted by the CNMI Customs division with the theme “A united Pacific working towards a common solution”.

The OCO members on the opening day witnessed three milestone achievements which was the accession of two non-WCO members, Tuvalu and Cook Islands to the International Convention on the Simplification and Harmonization of Customs Procedures (Revised Kyoto Convention) and signing of a Memorandum of Understanding between the UNCTAD and the OCO.

The MOU with UNCTAD provides a framework of cooperation between the parties, and to facilitate and strengthen collaborations between the two Organizations. The UNCTAD Automated System for Customs Data (ASYCUDA) is used by 6 OCO member countries.

The Conference delegates over the next three days will discuss a broad range of topics including Trade Facilitation, Revenue Mobilisation, Border Security and Digital Capacity.

The OCO wishes to formally thank the Conference host, CNMI Customs for the event’s planning and for the excellent organisation and their impressive hospitality.