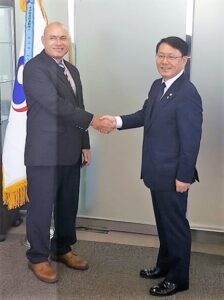 On 14 June 2017 OCO Head of Secretariat, Mr. Seve Paeniu paid a courtesy call on the Commissioner of the Korea Customs Service (KCS), Mr. Hong-uk Chun and Mr Jong-Woo Lee, the Director General of Information and International Affairs Bureau of KCS.

The discussions focused on the areas of mutual collaboration and partnership envisioned under the Memorandum of Understanding signed in March 2017 between OCO and KCS, which included capacity building programs, information exchange and other matters of shared interest. Mr. Paeniu expressed his appreciation for the generous assistance provided by KCS through its financial support and technical assistance to enable the participation of OCO members in the Trade Facilitation Workshop hosted by KCS from 13-16 June 2017 at the Customs Border Control Training Institute (CBCTI) in Korea. During the visit, Mr. Paeniu also had the opportunity to visit and observe the Korea Customs UNI-PASS Operation and Security Centre.

The OCO Head of Secretariat also met with the CBCTI Director-General Mr. Lim Seong-man and had a tour of the training facilities of the institute. Mr. Paeniu observed that the CBTI is a state of the art training facility that could offer future training opportunities for the OCO members. 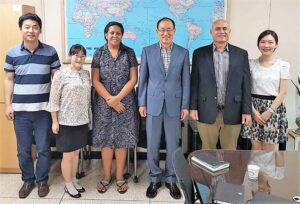 While in Korea, the OCO Head of Secretariat also paid a visit to the Regional Intelligence Liaison Office for Asia and the Pacific (RILO AP) on 16 June 2017 and met with the Head of RILO AP, Mr. Lee Seung-Kyoo and his staff. The RILO AP is a regional intelligence network organization under the auspices of the WCO Enforcement Committee. The dialogue with RILO AP focused on capacity building needs of OCO members to enhance the exchange of intelligence at national and regional level aimed at strengthening 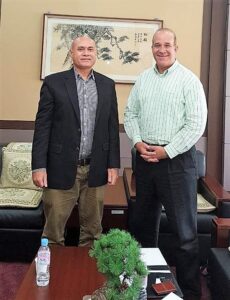 enforcement actions and controls. The discussion covered potential technical support by RILO AP towards CENcomm, a web-based secured communication system for information and intelligence sharing, and as well as capacity building on Data Analysis, Targeting and Profiling.

Mr. Paeniu also met with United States Customs and Border Protection (CBP) Attaché based in the US Embassy in South Korea, Mr. Edward V. Bayron and discussed ways and means for strengthening engagement and collaboration between the United States CBP and the OCO members.