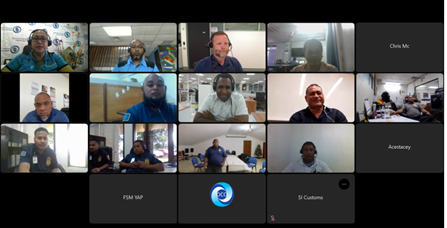 Suva, Fiji, April 22, 2022: As Pacific Island nations announce their easing of travel restrictions and opening of borders, Customs agencies are preparing for the increase in visitors, which also brings risks of transnational crimes to our shores.

This month, the Australian Border Force and the OCO Secretariat worked with Customs agencies to refresh officers with the latest updates in the mobile app- the OCO Pacific Small Craft App (OPSCA).

“Obviously, with the cyclone season ending this month, the new yachting season begins and while we encourage as many yachts as possible to visit the Pacific Islands, we are also mindful of the risks associated,” OCO Head of Secretariat, Richard Brennan says.

“The mobile app has been used over a year now by most of our members but there quite a few operational issues had been picked up which needed further enhancement of the app features. We need to update our members, the users,  so that the app fulfils its purpose which is to assist us in gathering information and intelligence on the movement of small craft vessels.”

OPSCA is a modern technology to assist Border Agencies with information collection and leverage the analysis capability on movement of yachts in the Pacific. The OPSCA adds value to intelligence gathering on small crafts and prepares the Pacific to take proactive approaches for any suspicious craft movement.

For some OCO member countries, this is the first modern digital software for recording the small craft movements thus there were teething problems.