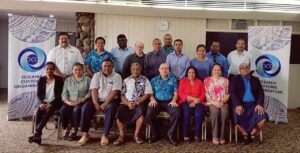 Customs administrations in the Pacific, recognize the importance of the implementation of the World Customs Organisation’s (WCO) Harmonized Commodity Description and Coding System (HS) for tariffs and trade statistics and for other purposes e.g. the rules of origin and economic research and analysis. In all free trade agreements that members are parties to and negotiating, including PACER Plus, the HS is used to define the product coverage, in the form of product lists with HS codes and/or product descriptions to identify products.

On 1 January, 2017, latest version of the HS, HS 2017 became effective. The majority of customs administrations in the Pacific have yet to update their HS to 2017 version and this was the rationale on the development of the PACHS 2017, intended to establish uniformity in the classification of goods amongst members. The PACHS is an eight (8) digit nomenclature, consisting of the six (6) of the 2017 WCO HS Code with the addition of the 7th and 8th digits subheadings as the “Regional Subheading”.

The background work on the draft PACHS was undertaken by the Statistics for Development Division at the Secretariat of the Pacific Community. The PACHS 2017 when completed will be provided to the OCO members who may wish to adopt it as part of their ongoing work on the implementation of HS 2017.

The Workshop was opened by Mr. Seve Paeniu, Head of Secretariat (HOS). Mr. Paeniu indicated that the validation and final endorsement of the PACHS 2017 would be a reflection of members continued efforts to work towards a uniformed classification of goods aimed at promoting the simplification and trade facilitation in the Pacific region. He expressed appreciation to SPC for the technical assistance provided for the development of PACHS 2017 ensuring that is not only consistent with the WCO HS Convention but also with the United Nations Standard International Trade Classification (SITC). The HOS also expressed members’ gratitude to the Governments of Australia and New Zealand for their financial support to enable the convening of the Workshop.

The participants were provided with the background and general structure of the PACHS 2017, numbering and dash system. The Workshop also involved presentations and case studies for each of the 97 chapters of the PACHS. An in depth, chapter-by-chapter review allowed participants to offer their views in each product categories. The OCO members also discussed their current work plans to implement HS 2017. Following from the feedback and discussions at the Workshop, the PACHS 2017 will be finalized and published by October, 2017.