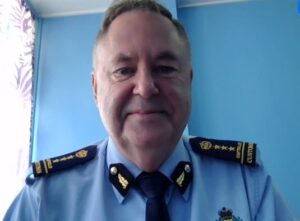 Suva, Fiji, November 1– Jim Sutton is the head of Solomon Islands Customs and is one of the most experienced Customs officers in the region with 45 years of Customs work experience in Australia, Afghanistan, Pakistan, Liberia, Ghana, Angola, India, Vietnam, East Timor, and Papua New Guinea. Even with his vast experience and despite the fact he holds three master’s degrees in Customs, International Revenue Administration, and Project Management, Jim says one is never too old to stop learning- he is completing a graduate program in Information Technology and a few other courses. A work stint in Angola whilst in his 40s, and in the midst of war and unrest, Jim found love, thus ending his bachelor-hood status. COVID-19 has separated the father of two daughters from his family who currently reside in Melbourne, which means Jim is pouring all his time into his work. But there are rare days when he has some spare time, and you would probably find him out at sea fishing. What is the best part of your job? I’ve been here now for more than two years; although at times it feels like 22 years. I’m here in Solomons on the Customs Reform and Modernisation project – which will probably continue as far as I am involved for another five or six years. My work has taken me around the world. I was a Customs officer in Australia for 18 years and then I jumped the fence and became a Customs consultant. Work-wise, I spent four years in Angola, then Vietnam, East Timor for a couple of years where I was the UN senior advisor to the Office of the Inspector General, where I also designed the policy work for the establishment of a new Auditor General Office. I was in Liberia, West Africa just after the war for a year as the chief advisor for the minister of revenue- I oversaw Customs and Tax Departments. Then I went to Afghanistan for three years in Customs Reform with the World Bank and UNOPS, and then to Pakistan for two years as Team Leader Cross Border Trade (particularly as relates to trade with India, Afghanistan, and Iran). After that, I went to PNG, then back to Vietnam, and then to Ghana for three years where I was the resident senior Customs advisor to the Ghana Revenue Authority. More recently I returned to Afghanistan for another year and then from Afghanistan I came straight to the Solomon Islands. What’s your vision for Solomon Islands Customs? My expertise is in entering post and current conflict environments where Customs as a functional organisation is usually completely broken down – the government has no self-funding revenue nor modernisation plan to get itself financially self-sufficient again. The Solomon Island Government has entrusted me to come in to grab Customs and drag it into the 21st century. Our legislation is 60 years old, and although there is some infrastructure to work with, upskilling our people is the key objective. So, my vision is when I leave here, there will be a modern multi-skilled Customs organisation. I want an organization that is known and recognised within government, industry, and by the public for its honesty and integrity, and professionalism. I want to be innovative, so I will bring in new ideas and introduce international Customs best practices. I want the workforce and workflow to be efficient and effective in undertaking our mandate of trade facilitation, revenue collection, and community protection through management of our porous borders, (as the Solomon Islands consists of nearly 1000 individual islands). 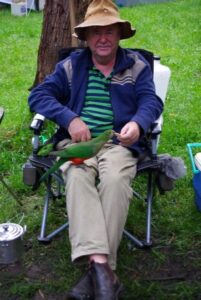 I want us to be WCO and WTO compliant and we are working towards that. I want our IT systems to be upgraded and on par with international standards. Once we get the upgrades completed, I will add on about 15 or 20 different modules that would be specifically targeted to the Customs and trade needs of this country. I have recruited some international training experts in compliance and risk management, Customs audit, human resources and staff development, and cargo examination at the ports and airports. In a nutshell, that’s my vision. It’s a lot to achieve but it’s achievable How has COVID-19 impacted Solomon Islands Customs? There are a few main areas of our operations that have been affected. Two of our international advisors are currently offshore because of border closures and are unable to come, but they are working remotely. That makes delivery of face-to-face training difficult for those areas of expertise. We’ve built a training center, so it is waiting for more trainers to come in and better utilise it. We can’t bring in the IT specialists at the moment either, so they can’t come into the country just now, thus our IT upgrade has been pushed back for a year and a half so far. However, we have new recruits who are degree holders, some of them have IT programming degrees so we have a new skill set in that area. COVID has generally put huge pressure on the government budget and we are finding it hard to get funds for some of our planned reform projects- even things like putting everyone into a nice new uniform is financially constrained. We don’t have any support from outside the government or anything like that so basically, we are on our own, although the Australian government is looking at providing us with limited procurement, which will help us. COVID has slowed our modernisation program to the point where it will probably take another two to three years to catch up from my original master plan. What are the other critical challenges faced by Solomon Islands Customs? Every organisation you’re coming into after civil unrest will have major internal problems. The biggest problem that I faced as soon as I got here was that of perceived endemic corruption in Customs by trade, so the first thing I did was deal with that issue internally within my organisation. We also have a budgetary challenge- so that makes life a bit hard. Other than that, I think internally the biggest challenge I have is how to fight the fear of the unknown and change management- we have new recruits last year and this year, all graduates. I think the existing staff are fearful of change to a certain extent. They think they are going to be passed over for promotion because no one has a good degree or even a diploma, so my challenge is to make sure these officers are looked after and so we have designed some special training programs for them to pick up various skills and enhance technical knowledge. The other challenge on the revenue collection front is also Covid related – for example, turning away vessels that had crew who were COVID-19 positive, which costs the government lost revenue, and general financial impact of the slow-down of the economy generally, affecting imports. What would be your ideal job? During one of my master’s degrees, I had to undertake a task called “brain mapping”, where you answer a series of psychiatric questions and the process result then tells you which job suits you. My assessment was that I was suited to be a magistrate or judge, which in many ways fits with the decision-making part of my current duties. Although I wouldn’t have minded becoming a farmer. There is something about small-scale rural life that entices me! Perhaps in retirement… For more information, queries, or interview requests, please email MediaOCO@ocosec.org  About OCO: OCO is a grouping of 23 customs administrations in the Pacific region. It facilitates regional cooperation, information sharing, and capacity building of its members with the overall target of supporting economic growth and improved border security in the Pacific.